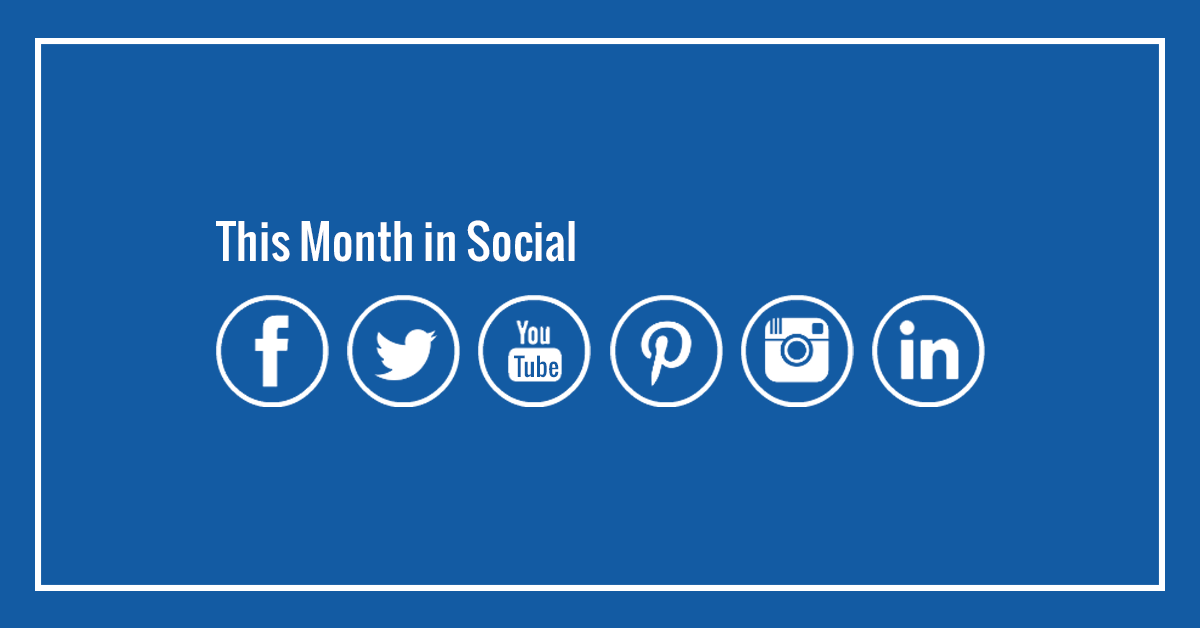 This Month in Social: September 2016

Facebook is Updating its Coupon Product, Offers
Introduced in February of 2012, Facebook’s Offers helped brands distribute coupons on the network. In an effort to make Offers more of a Facebook product, the social media giant is doing a major upgrade. Soon, users will be able to see, save, and use coupons easier – especially while on mobile.
What this means for businesses: Opportunity, opportunity, opportunity! Since users can now save offers they’re interested in, businesses will be more likely to capitalize on those special offers in the future. Users will also be notified when expiration dates are coming due, which creates an effortless drip-campaign for the promotion. Thanks Facebook!

Twitter Adds New Direct Messaging Button to its Publishing Tools
Twitter has launched a new feature, a direct message button that can be added to external sites. Meaning? Users can now interact with their favorite brands and businesses directly from their websites.
What this means for businesses: Consumers can already chat businesses though Facebook messenger, so naturally – in comes Twitter. Twitter is taking yet another step towards becoming the preferred customer service platform for businesses. Unlike Tweets that are limited by characters, Twitter messages have a much larger character limit – making a live chat experience that much better.

Instagram’s New Pinch to Zoom, Low-Light for Stories, and the End of Photo Maps
Bunch of changes in Instagram land – first, the very welcomed pinch to zoom feature. Now you no longer have to strain to see photos, simply pinch to zoom for every detail on your friend’s new shirt or what the food choices were at DL’s Mexican Fiesta. Next, in an effort to produce better photos and videos in low-light conditions, Instagram has added a “low-light button” to its Stories feature. And finally, Instagram is killing off its photo maps – but don’t fret, geotags for locations aren’t disappearing.
What this means for businesses: Ch-ch-ch-ch-Changes, turn and face the strange! While the first two updates will enhance usability and photo quality – the outcome of losing the photo map will vary due to the nature of your business. For travel brands, franchises, even companies with multiple locations – this could be somewhat disappointing. But according to Instagram, this feature wasn’t widely used to begin with and as such it’s time to remove and focus on other priorities (competing with Snapchat perhaps?).

Snapchat is Removing Local Stories
Snapchat has decided to stop producing Local Stories – a feature that curated photos and videos users posted to a given city’s feed – ex: Big Apple’s Local Story. Now, they are looking to focus on more event-specific moments.
What this means for business: Since Instagram’s release of Stories – Snapchat has been looking to raise the bar. Just another change to keep on your radar in the constant battle of the social networks.

Facebook Officially Showcases Vertical Videos in Mobile Feeds
After a few months of testing, Facebook has found that users watch vertical videos longer and with sound on when presented with the vertical versions in their mobile news feeds.
What this means for businesses: It’s been drilled into our heads, horizontal videos are the way to go. But in an increasingly mobile world, perhaps things are changing. Time to start testing a new presentation style! If vertical videos start outperforming horizontal ones in Facebook’s engagement metrics – there’s a good chance this format will be indirectly favored in Facebook’s algorithm.